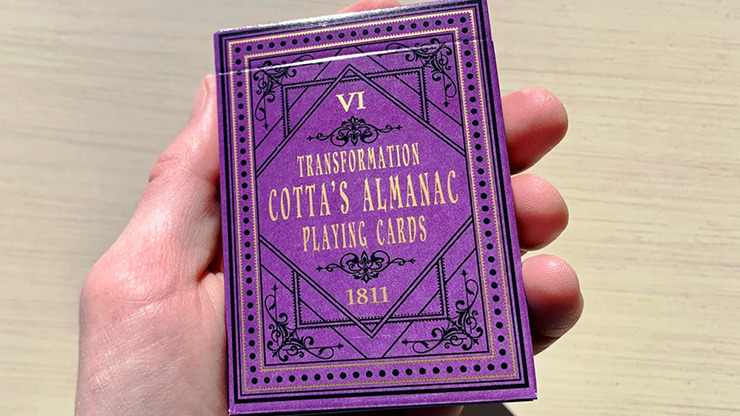 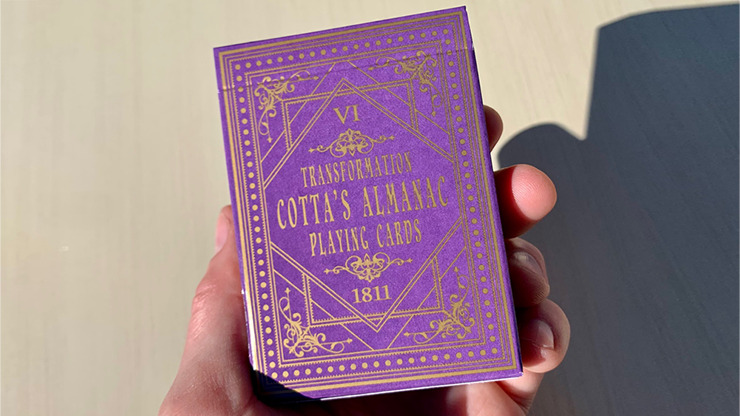 Introducing a precisely restored and digitally hand-recreated reproduction of the final Cotta’s almanac deck full of history, and for the sixth time, strongly touched by Schiller’s works, continuing after the previous pink, red, yellow, green, and blue one, which was the first published complete transformation playing card deck in the world!

The violet “Knightly Orders” 1811 almanac deck is the sixth in a series of six famous transformation playing card decks.

The court card figures depict members of various knightly orders and the characters are in the robes of various orders of real knighthood / damehood or spiritual orders, while the theme of number cards is romantic or even spiritual with a variety of subjects & sixteen of pip cards have scenes that can be considered illustrative of the four seasons.

Additionally to the series of Cotta’s almanac decks, all influenced by notable authors, and bottom lined as somehow always mysteriously connected with German poetic genius Johann Christoph Friedrich (von) Schiller, this one might also draw on aspects from another Schiller’s cosmopolitan thinker philosophical response work – especially when interfered with surveying public question about his quiet Masonic potential membership, but this has not been proven yet.

This 6th deck may be pointing to Schiller’s cosmopolitan thoughts about the world orders or various communities and memberships, and even to potentially hidden answers through some of his works with resembling context such as “Don Carlos” play or a ballad written in a year of friendly ballad competition with Johann Wolfgang (von) Goethe – “The Glove”.